In this series of posts you’ll get to know the folks and (more importantly) the ‘hounds behind the Great British Greyhound Walk. 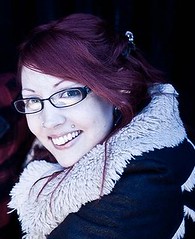 Claire belongs to two hounds, Ziggy and Hector, and together they have been going on Greyhound Walks since late 2010.

Claire currently volunteers for Greyhounds Walks as the resident GBGW Website Guru. As the Head (read: only) Web Designer and Developer, she is responsible for all the complicated fandangly whizz-bang oojimajiggery that makes the new GBGW website so much more interactive than it was before.

Aside from being the brains behind the new and improved GBGW website, Claire is a fully-trained Web Developer that occasionally gigs as a Features Writer and recently, has turned her hand to Public Speaking. In her spare time, she’s a keen amateur photographer whose work often features her beloved ‘hounds.

Claire’s Favourite Place: Snuggled in bed with her houndy-boys
Claire’s Speciality: Positive Thinking (and an encyclopaedic knowledge of the Music and Career of Prince.)

Ziggy was originally schooled in Ireland as a racer, but did rather dismally when it came to test trials. Whilst the rest of the litter went on to forge successful racing careers, Ziggy and his brother (Ricos Time) were transported to the UK, where they were cared for by the Retired Greyhound Trust. Ziggy found his people during his stay at the Brentwood RGT and on 12th November 2009, he left kennel life and finally went home.

Ziggy is a gentle giant with a sensitive soul: eager to please, but easily spooked. Although mostly silent, very large groups of dogs can make him nervous and liable to grumble, loudly. Ziggy can be found plodding along carefully on “Short Walks”, slowly building his confidence amongst smaller groups.

More beauty than brains, Ziggy features on several ranges of greeting cards (as featured and published by MOO) and has had suc­cess upon being entered into the Greyhound Walks annual Dog Show: he cur­rently holds the title of Black Beauty, 2011. Well, he is a dash­ingly hand­some boy…

Hector is a Whippet; Whippets are Sighthounds much like Greyhounds, only a smaller and slightly bouncier model. Hector was the last of an unwanted litter of seven – the “owner” even went as far as to “go halves” on the petrol when Claire went to collect him(!) – his Mother was used for lamping and his Father ran on the Flapping circuit. Luckily, Hector was taken to his Forever Home on 14th Septem­ber 2010, at 12 weeks old.

Hector is such a playful character, bursting with endless affection and mischief. He is a total cuddle monster and will work those big puppy eyes and cute wonky ears to get exactly what he wants. Hector is often seen practically super-glued to Claire’s wheelchair: desperately devoted to her, he insists on being at her side/on her lap whenever possible. And when this isn’t possible, he turns into the resident Whinging Whippet™ (no home should be without one…)